July 08, 2013
These two weeks are extremely fruitful. Almost all my expectations for coming to Beijing have been met in such a short time-- to form long term relationship with entrepreneurs here, to work with talented designers, to improve my coding skills, to experience the tech entrepreneur life, etc.

I'm loving the city. Though not as clean and nice as Singapore, this is a place for young dreamers to pursue their careers. As a famous song writer wrote about Beijing, "我在这里欢笑(I'm laughing here) 我在这里哭泣(crying here) 我在这里活着(living here) 也在这里死去(dying here) 我在这里祈祷 (praying here)我在这里迷惘(confusing here) 我在这里寻找(seeking here) 在这里失去(losing here)". The extreme inequality creates a lot of diversities and opportunities here in Beijing. The youth have a strong desire to be successful and they form active entrepreneurial communities in cafes, meetup groups, incubators,etc(mostly in and around Zhong Guan Cun). 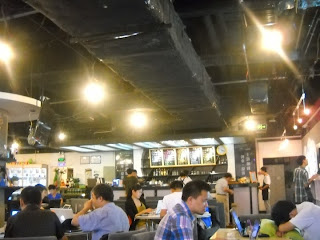 Here is a photo taken in Cheku Cafe which is a tech hub for young entrepreneurs to work and communicate with each other. Programmers, VCs, designers, all kinds of people gather here. You can order a cup of coffee to chat with the entrepreneurs. Also, you can also spend 30 RMB to stay overnight and drink unlimited beverage. The scene looks more like an incubator than a cafe shop. There are quite a few similar entrepreneurial cafe shops around Zhong Guan Cun. This kind of environment seldom appears in Singapore.

In a weekend hackathon named Beijign Tech Hive, I, together with some local and overseas entrepreneurs worked on an interesting idea to teach normal people how to code. There are quite a few successful US websites like CodeAcademy and Treehouse who teach people how to code. However, there seems to be no efficient/fun code teaching websites here for the Chinese public. It's not a copycat, but our own thinking on how to gamify and engage the mass Chinese Diaosi(a term to describe the mass general public in China). There will to be a lot of trial and errors when we are not sure about how the business will go.

During the hackathon, a few VCs came and gave suggestions to teams. One suggestion from Mr. Hu who knows the Chinese IT industry so well suggests that the premium/membership model will not work well in China. Job portal service may not be profitable&workable if the courses are for beginners. A promising business model would be to work with IT companies, as a outsourcing recruiter for training, examining and recruiting programmers.  Another VC suggests that the Diaosi group is the most promising target group in China. A very successful live video streaming service named YY has recently tripled their stock price in NASDAQ mainly due to their successful self-positioning in identifying the diaosi market. That's a very interesting advise.

I worked very hard on the project since other PMs in the team don't really code... Well, personally I think good PMs should be more capable in coding and be able to build their own business. I picked up Ruby on Rails quickly and built the demo out with a super talented designer and two PMs who worked on the front end. Another android developer worked on the mobile platform and the team leader worked on the video contents. Our team got the second place in the hackathon, which is pretty amazing. 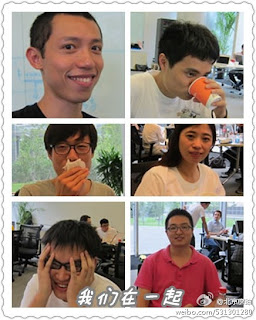 The team leader who got his MBA in the US is doing full time in entrepreneurship when his fiancee who works in microsoft can support him for a while. He is actually very clever in moving the project forward. He strategically form good relationships(share equity) to honorable people as mentors, which is good for positioning the company in the long run. The talented designer comes from another startup which is recently bought by Alibaba. He is interested to move this project forward. Two PMs in the right corner will be working on a traveling service and not be interested to continue working on this project. The android developer may probably help in a parttime basis. As for me, I'm personally not confident enough to make it a great service. My skills would probably only be able to support the early stage business for half a year-1year. However, by the time we are strong enough to employ amazing developers, I will feel extremely delighted. By then, I may become a PM working together with talented developers.

Integrity wise, I will never break the bonds in Singapore. That's why I didn't apply for fulltime job in the US/China. I tried to apply for summer/winter internships in the US/China. I even planned to delay half a year for Israel as a last chance to pursue entrepreneurship before serving the bond. Unfortunately, I didn't get these opportunities. As for the jobs in Singapore, I applied some interesting startups. However, that may not be the right time for me at this moment. Prof. Anthony is really interested to move his social annotation service forward and he offered me to work on his project for another half-one year. Well, I personally think the UI/UX is too bad in the industry standard. It's not so promising to make good money on that project,either. Doing enterprise solution would probably be a right approach in Singapore. However, that's not cool. I would rather a service being used by many people than dying in a corner with a good price but no one uses. Thus I suggested Prof. Anthony to target on the Chinese market. He also think that the Chinese market should be the way to go thus he agreed me to stay in Beijing for quite a while. It's very likely that I will be doing my own business( the coderobot project and part of the social annotation project) in Beijing in the next half-one year. I'm ready to fail and die in the next year. But I'm sure I will learn a lot along the way.

During the hackathon, I also get to know a few very talented developers. One of the teams work on a show-off app which allows the ladies ageing 20-40 to publish beautiful pics of their own to the public. Only positive feedbacks(like and share)will be allowed, thus the ladies will show-off more after using the app. Two of the team members are very talented programmers(one of which is among the most talented I've met so far). They opened up their small tech company around Zhong Guan Cun. The other team members are ladies who know design/fashion and love to show off. The super talented developer once worked with a business co-funder. However, when they received 5million RMB funding, the business co-funder kicked him and another tech co-funder out and continue doing the business in HK with other people. That was so bad! During the hackathon, a VC from Sequoia Capital also came. He was impressed by the developer on his intelligence. The developer shared some thoughts with me on being a tech entrepreneur. "It's like painting. Before finishing your work, it's like a piece of shit(piles of inks vs tons of codes). However, when you polish it in a year, it looks like a masterpiece.","To maintain a small tech company, we'll need to have new ideas every month, otherwise, it's very hard to feed the team." That's so interesting.

My main mission this month is to help the 万门大学(One-Man University) build a first stage website out. I used Rails to build the whole CMS system again which is hosted in Git. Unlike Coursera which provides all kinds of courses, Wanmen is more of a knowledge integration system which gives suggestions on how to learn by oneself. A good thing about open-sourced project is that it liberate people's creativity. I feel so lucky and honoured to work with my friend, Tong Zhe, the president of this virtual university. Wish all the best to him and the open university!