May 01, 2015
I attended the innovFest 2015 event. It was quite eye opening. Besides the booth, some topics in the forums also interested me.

The first topic I joined was the Kopi Chat with Yossi Vardi, a famous Israeli entrepreneur and investor. He is straightforward and humorous. When talking about the most important reason why people wake up with a great idea but ended up sleeping without executing anything, he collected answers from the audiences. One answer pretty much fitted his appetite-- "People fear about losing faces". He shared his opinion with the quotes from Theodore Roosevelt, “It is not the critic who counts; not the man who points out how the strong man stumbles, or where the doer of deeds could have done them better. The credit belongs to the man who is actually in the arena, whose face is marred by dust and sweat and blood; who strives valiantly; who errs, who comes short again and again, because there is no effort without error and shortcoming; but who does actually strive to do the deeds; who knows great enthusiasms, the great devotions; who spends himself in a worthy cause; who at the best knows in the end the triumph of high achievement, and who at the worst, if he fails, at least fails while daring greatly, so that his place shall never be with those cold and timid souls who neither know victory nor defeat.” 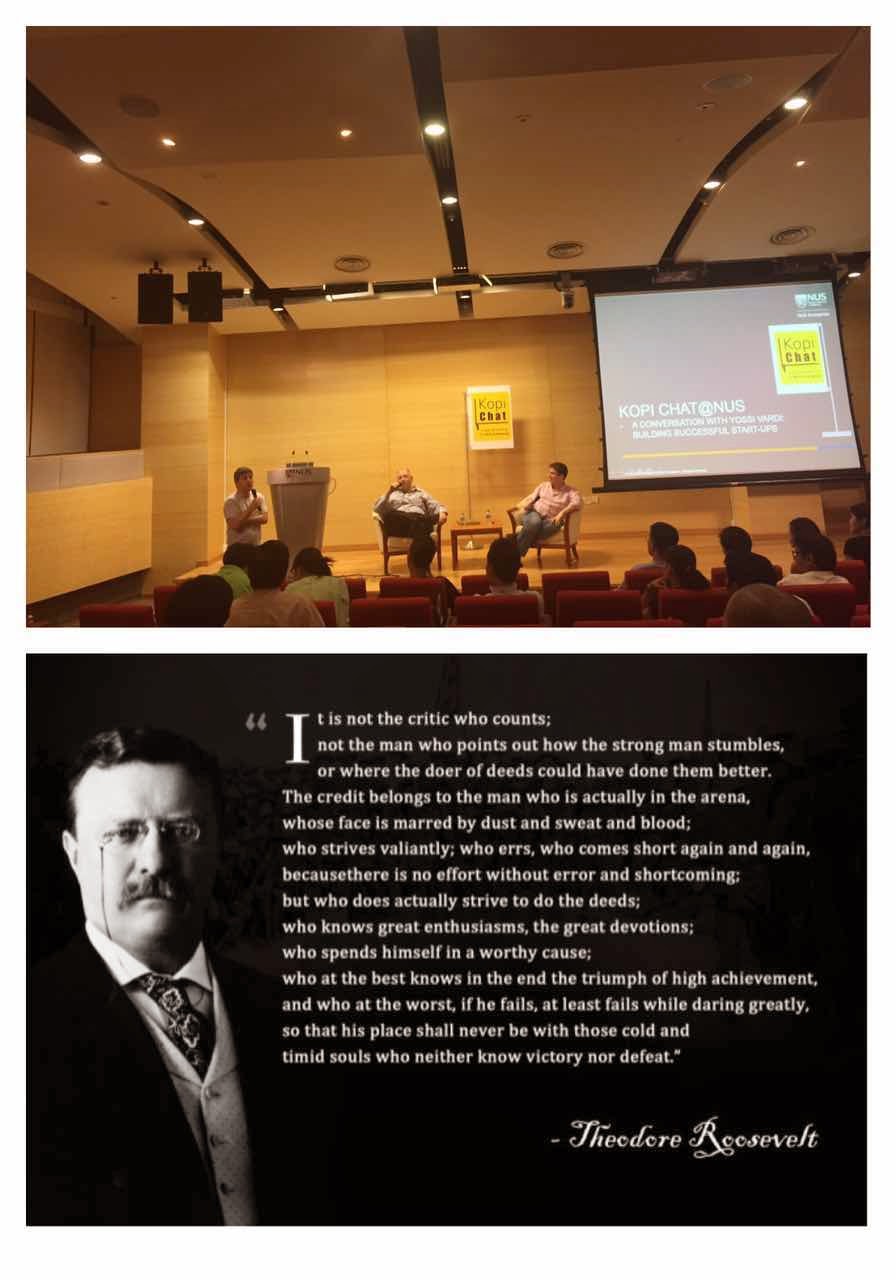 The second topic I joined was a Venture Capital forum moderated by SingTel Innov8's CEO, Edgar Hardless. Guests are Jixun Foo from GGV Capital Shanghai, Neal Cross from DBS and Wilson Cuaca from East Ventures. Jixun shared his opinion regarding China's innovations and trends from his 10+ years of investment experience in China.  The innovations in China once were copycats from the western innovations, but they have surpassed the initial ideas by creating products and services which really fit the market. E-commerces are getting more vertical to differentiate between taobao and jd.com.  Both Jixun and Neal spoke highly of Alipay which definitely drives technology in the financial world. Jixun also shared his own opinion regarding what might be the next big innovation comes come from in China. He shared two things: China has a lot of inefficiencies. That's where technology and services can really make a difference. There are second tier/third tier/forth tier cities in China where people are using mobile only(without PC). China is more than Beijing and Shanghai. The next billion dollar company may come from mobile only products which will be vertical for people to explore and help solve the inefficiency problem in China. One example would probably be agriculture. Wilson answered a question brilliantly regarding how Singapore startups can expend the markets into neighbouring countries. He answered that in Singapore, everything is based on a best case scenario where the networks, infrastructures, 3G/4G, have no problems. While in some other countries like Indonesia, entrepreneurs should assume that everything is in the worst case scenario. That's very different. 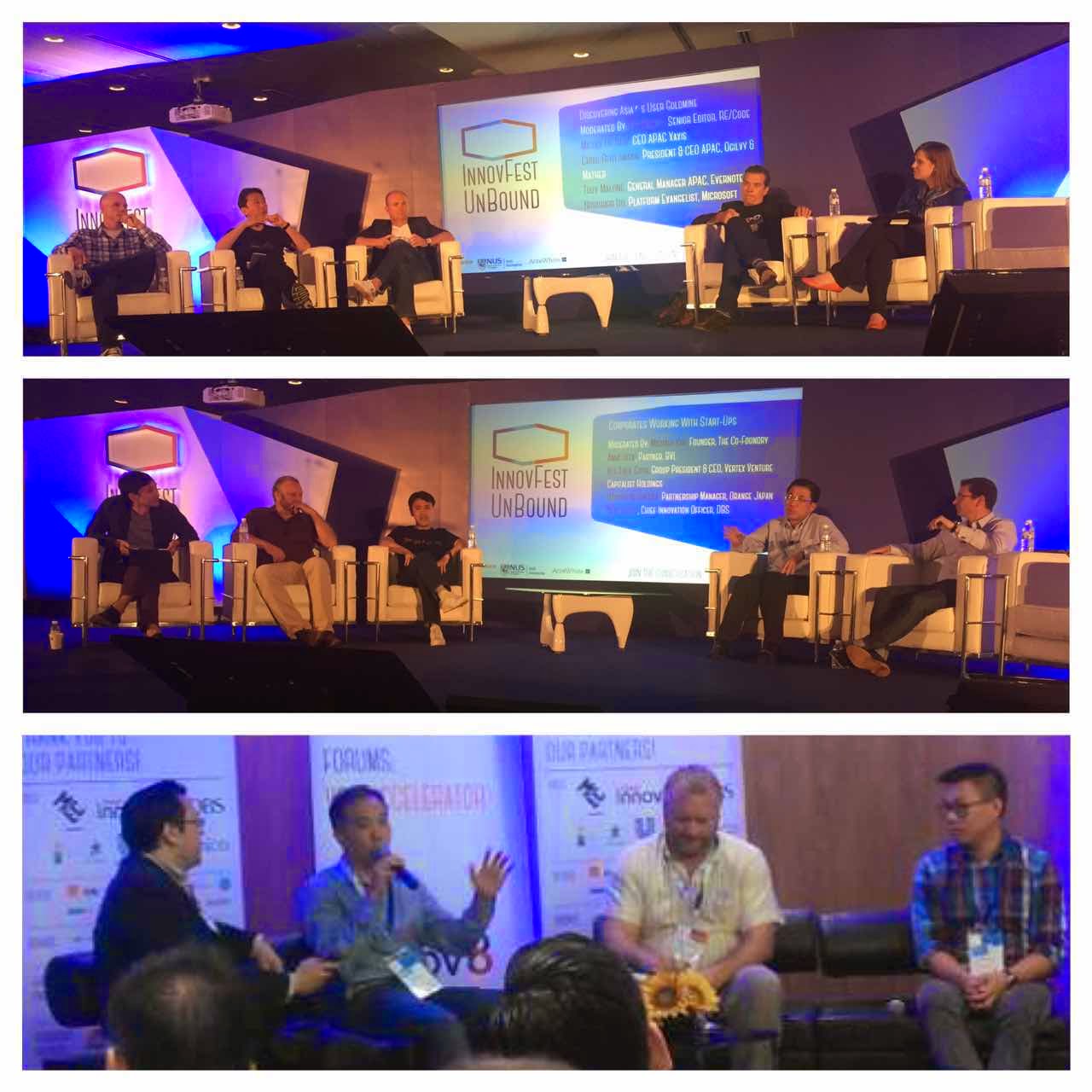 Neal also joined another topic regarding how big companies and small companies should work together. He set an example regarding how DBS organises hackathons to solve their own internal problems and adapt to certain cultures from the startups. This topic is moderated by Michael Yap who is one of the most well-know Singaporean technology entrepreneurs and angel investors. I knew him from one of my friends who was once under his incubation coworking space in the Co-Foundry. Thankfully, I had a short conversation with him afterwards.

Another very interesting sharing was regarding Asia's User Goldmine. The speakers includes Chris Reitermann, O&M APAC's CEO, who is a hardcore marketing guy, Nobuhiro Ito who is a marketing direct and evangelist from Microsoft, Troy Malone from Evernote, Michel de Rijk from Xaxis and Liz Gannes as the moderator. The answer regarding what is the user goldmine, the answers from Nobu and Troy drew my attention. Nobu said "cross-platform" is the way, Troy said "first of all your product needs to be really good". I guess it's because I'm a tech guy thus I buy these answers more. My partner, Wing, who comes from marketing&biz background prefers Chris and Michel's answers more.

Fooyo is currently incubating our own product. We believe the product suitable for other Asian markets such as Japan and Korea. Thus I also attended another session named "Japan & South Korea - Is There Room for Outsiders?" The speakers include a governor from Japan, a Korean VC working in a Japanese venture capital company and a Korean telecom company officer. After the session, however, I found it really difficult to enter these two markets. One interesting phenomenon raised by Mr. Saemin Ahn is that big companies in Japan tend to diverse their own products/services to enter into more fields, which makes startups, even the local ones very difficult to survive. Another very interesting thing agreed by the guests is that sometimes the startups may go through more rejections for fund approval a lot in Japan and Korea before they are finally approved. Whereas in Singapore, it's normally quite straightforward. If you are not approved once or twice in Singapore, that means you are not qualified and you need not to come again. However, you may need to apply again and again in Japan to show your determinations before the funds get approved.

Besides the forums and talks, I also encountered a few interesting projects.  Some of my friends were having booths. Qiyue was demoing a space management solution. Qiao Liang and Jay were demoing their new BigSpoon app. While my previous project, ReadPeer was also under demo in SeSame Research center. One project which surprised me was the Aerolion quadcopter project which was once a school project named NUSlion. This new project has won the bidding for State Grid over Dji.com. It is now ready for mass production. That's great news. In picture is me with my friend Jiayuan, who is the first full time employee in the Aerolion project. 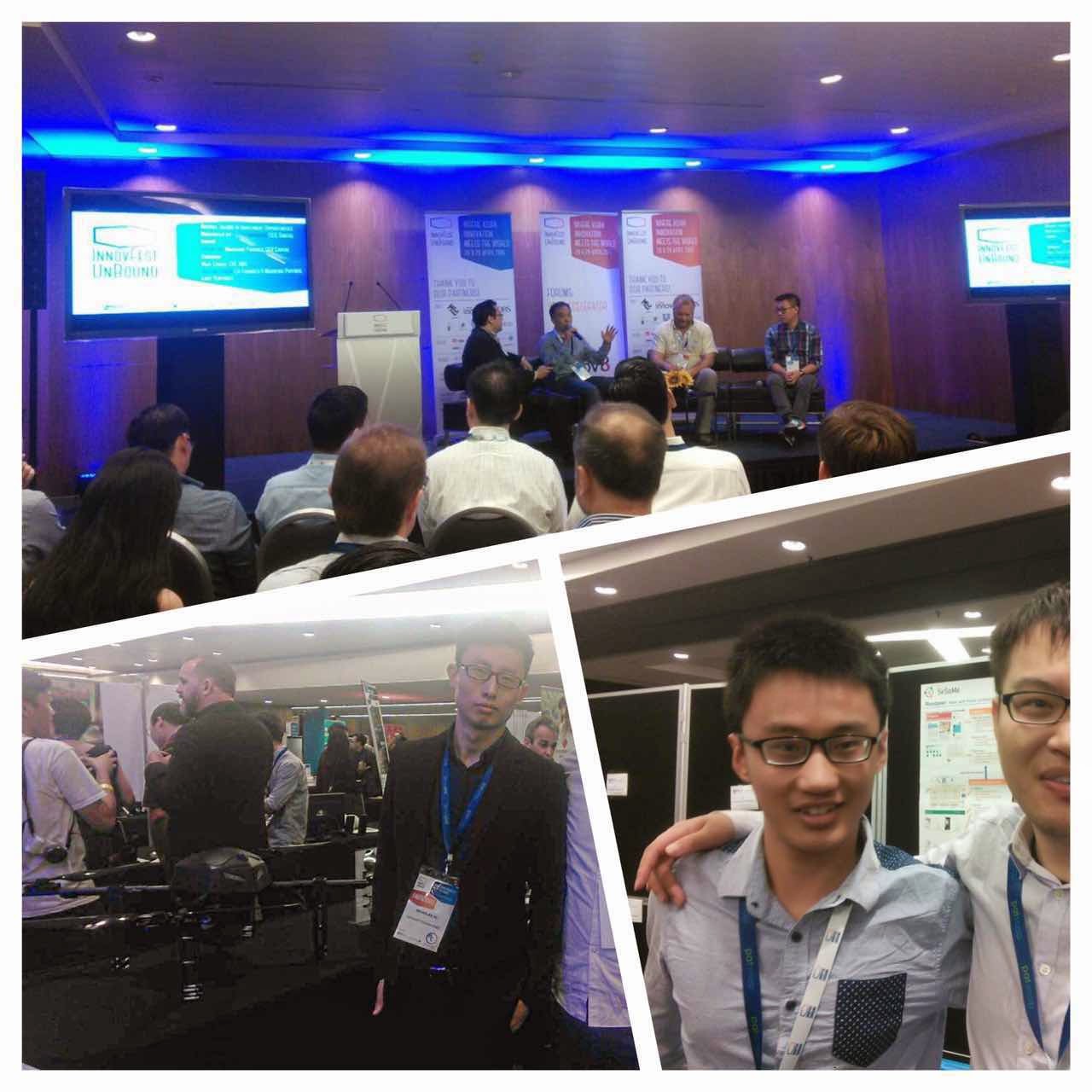